Riding a massive forehand and a first serve that regularly reached the low-130-mph range, Matteo Berrettini put a major scare into Rafael Nadal in the U.S. Open semifinals.

The 23-year-old Italian held double-set point in the first set tiebreaker and the capacity crowd in Arthur Ashe Stadium was buzzing with the possibility of a historic upset.

But No. 24-seeded Berrettini hit three straight backhands of differing varieties into the net, including one drop shot, and No. 2 Nadal pulled the set out like Houdini despite trailing 4-0 and 6-4. The crowd's collective energy diminished and Nadal ultimately prevailed 7-6(6), 6-4, 6-1 to advance to Sunday's U.S. Open final.

"I survive at that moment and finally I had a break…And after that the match completely changed. I started playing with more calm and a little bit more aggressive. I’m super happy to be back in the final of the U.S. Open."

Prime Day 2019: Save On A Fire TV Stick And Recast Bundle

Nadal has career earnings of about $111 million while Medvedev has made about $6 million.

"He’s one of the more solid players on tour," Nadal said. "He’s making steps forward every week, having an amazing summer. Is the player that is playing better today on tour this summer so will be the toughest opponent in the final. In a Grand Slam final, you can’t expect to have an easy opponent. You need to play your best."

Should Nadal win the title, he would come within one major of Roger Federer's men's mark of 20 Slams. It would also mark the 12th straight major won by a member of the "Big Three" of Nadal, Federer and Novak Djokovic (16 majors). It would then be entirely possible Nadal could tie and surpass Federer sometime in 2020.

"There’s no telling what [Nadal] can do in the next couple of years," Patrick McEnroe said on ESPN. "Obviously, Djokovic is right there with him."

"Can you imagine if Federer could end up third?" John McEnroe said. 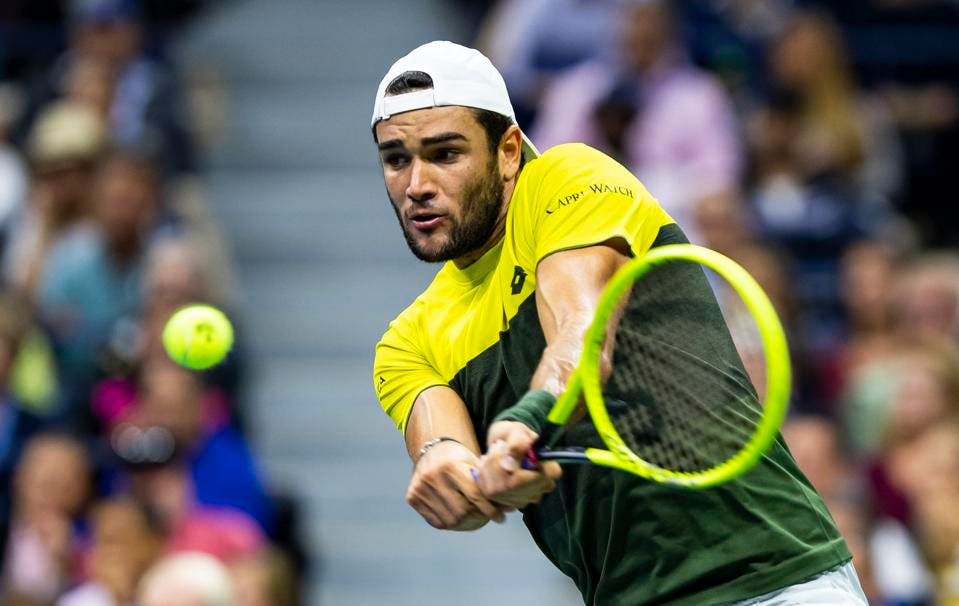 Medvedev (50) and Nadal (46) lead the ATP tour in wins this season, so in some ways it makes perfect sense that they are meeting in the final as much as Federer or Djokovic were favored to come through the top half of the draw.

They have met just once, with the Spaniard putting a 6-3, 6-0 beating on the Russian in the finals in Montreal last month.

"I had one breakpoint, then he got a break, but I only lost with one break," Medvedev said of the first set of that match. "Then he was only going harder, harder, faster, stronger, and I was only going down.

"It's great that I have this experience playing him in the final of a Masters. I know what to expect. I know how to prepare for it."

Both semifinals were played with the roof closed because of rain, allowing for slower, more pleasant conditions after extreme humidity impacted the players the last several days. 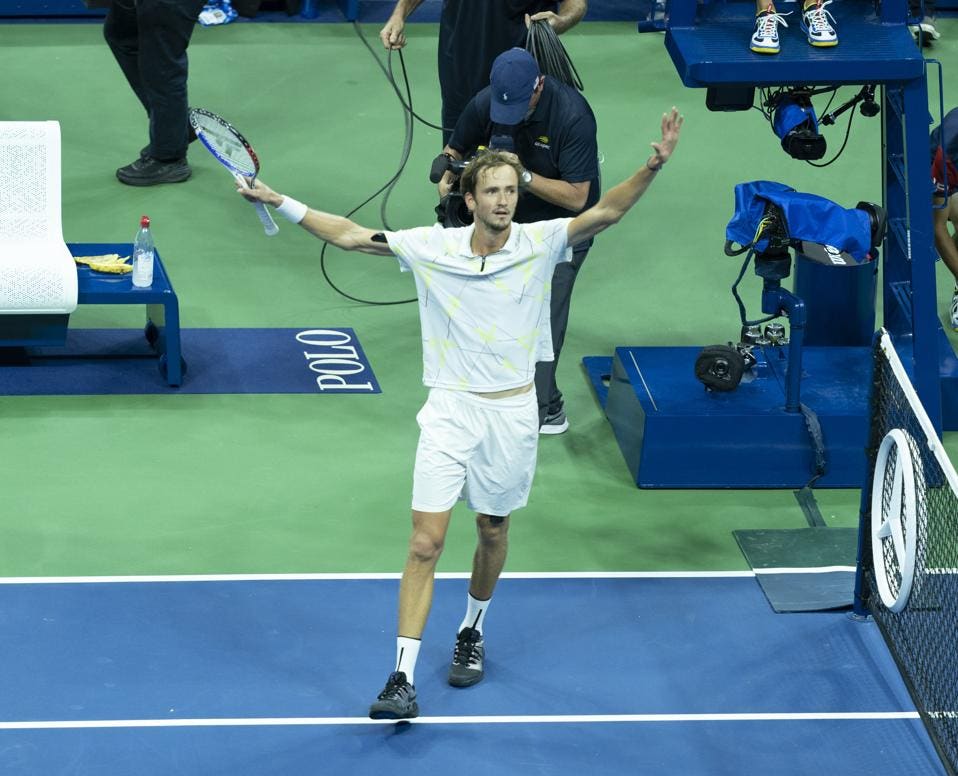 In the first semifinal, Medvedev showed few signs of the wear and tear on his body that has caused him to wear tape on his left knee. He dispatched Dimitrov, who was coming off a monumental upset of an ailing Federer in the quarterfinals.

For a man who stands 6-foot-6, Medvedev moves exceptionally well and simply had too much game for Dimitrov. He's now into his fourth straight final and is 20-2 in his last 22 matches.

"When I was going to the USA I didn’t know it was going to be that good so I have to say I love USA," he told the crowd of his summer.

In Nadal, he will play his fourth left-hander of the tournament, something which may give him some hope in the final.

"But of course it helps a lot that I played three lefties before with completely different style, all of them," he said. "Kind of getting used to it. If Rafa wins, it's going to help me."

Before Nadal's victory, Dimitrov was asked if Medvedev has a chance in his first major final.

"I mean, anything's possible," Dimitrov said. "You get the chance to be in the final, so you got to leave everything out there...I think absolutely he's got a major shot."

Like Medvedev, Berrettini is 23, and the two semifinalists may have provided a glimpse into the future of tennis in the post-"Big Three" Era.

At 6-foot-5 and about 215 pounds. Berrettini looks like an NFL linebacker. His serve and forehand are massive weapons and carried him into his first major semi. They helped him navigate a tough five-set, nearly four-hour encounter with Gael Monfils in the quarters on Wednesday and made him the first Italian semifinalist at the Open since Corrado Barazzutti lost to Jimmy Connors in 1977.

Both of those men were in the building as Berrettini threw a scare into Nadal early. Had he pulled out the first set in the breaker, the match might have gone differently. 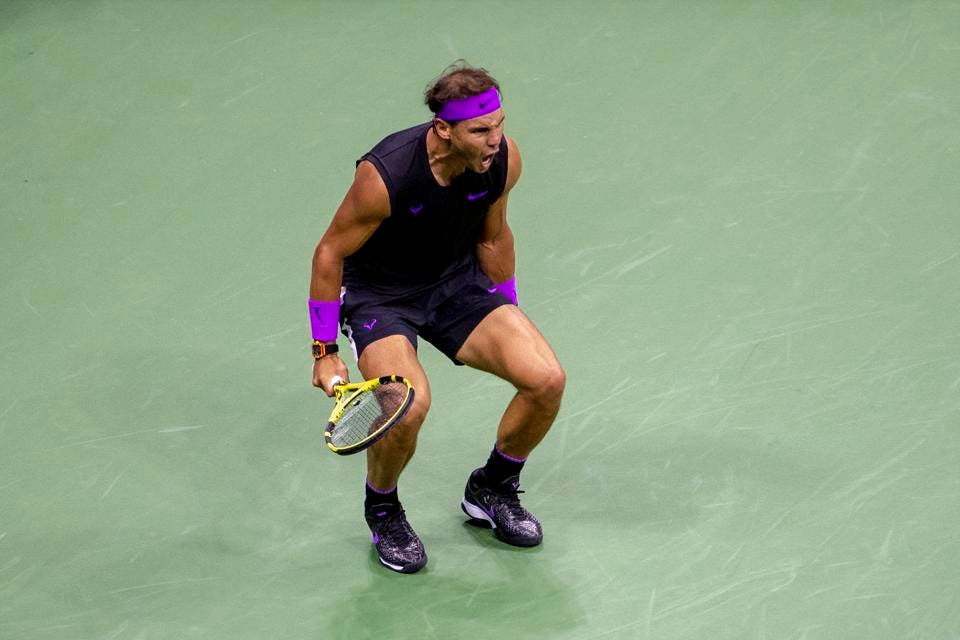 But Nadal dug deep and pulled out the first set when the Italian hit a forehand long. He then broke Berrettini in the seventh game of the second set and took a two-sets-to-love lead by holding at 5-4.

Nadal is now into his 27th major final, trailing only Federer's 31. Nadal is 18-8 in major finals and will now be a favorite to add another to his collection.

"Talking about Rafa, it's tough to find words," Medvedev said. "So many players and so many people found them before me. He's one of the greatest champions in the history of our sport. He's just a machine, a beast on the court. The energy he's showing is just amazing.